Already by many was noted the terrible quality of SSB signal on 23cm from Kenwood Ts-2000x transceiver. Reason of it has been proven to be simple - output amplifier on module MITSUBISHI M57762 works in the deep class C.

Control of module is achieved by signal 12TXB which it ensures the bias voltage only about 6.8V DC in the regime of the transmission, instead of  9V, as indicated in the documentation. This bias voltage is given to the pin 3 of module. Module begins to work linearly with the voltage aprox. = 8V. The current, consumed on the bias circuit of module is aprox 0.31A with 8V and grows to 0.35A with 9V of bias.

For guaranteeing the linear operation of the output stage it was necessary to place additional controlled stabilizer. As this stabilizer it is possible to use integrated circuits such as BA09CC0WT, BA08CC0WT, KA78R08C, KA78R09C or analogous. Possibility of use of usual stabilizers, such as LM7809 is possible, but  then is necessary to add control circuit by discrete devices.

On the schematic diagram is a modifications, which are necessary to fix the problem, here:

To the point "A" will be given the new bias voltage of module (8 or 9V, depending on the used stabilizer. From the point "B" is taken the signal for control of the microcircuit of stabilizer. Voltage at this point is present only during the transmission. The input voltage of stabilizer is taken  from the point "C". In the case of applying the diagram of control on the discrete elements still will be required earth (gnd).

1. unscrews the upper and lower covers of transceiver.
2. unscrew from the side the transceiver the cover, which fix the 23cm module Ut-20.
3. unscrew the metallic cover, which closes the space of supply connectors
4. detach the flat cable, which goes to board Tx-rx1 UNIT (HF/IF) (CN27). Remaining joints it is possible not to touch.
5. loose the screws, which fixing the board to the housing and then turn over carefully the board as shown on the picture: 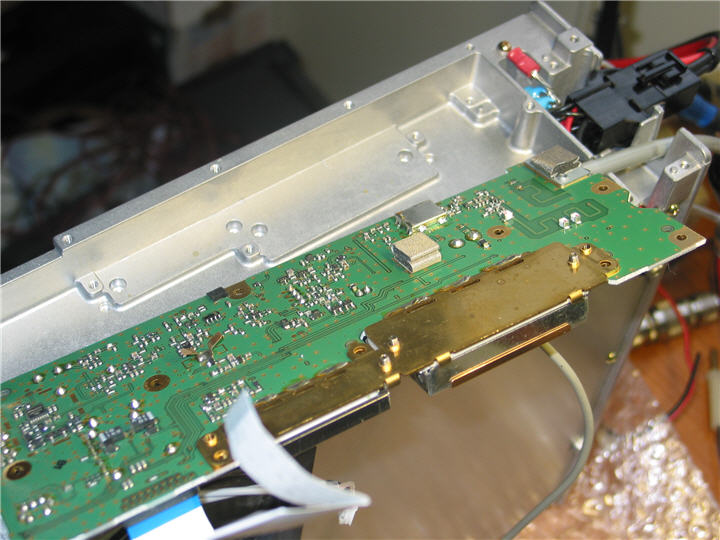 6. Cut of  printed path as shown on picture and put the board back in the place. 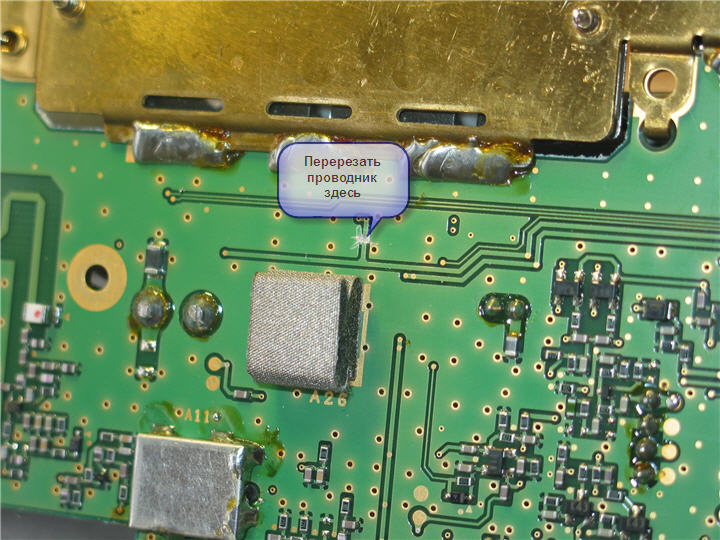 7. install stabilizer beside in the supplying box space as shown in figure. In this case the terminal, which connects varistors with the earth can be transposed under the screw of fastening metallic cover.

8. connect by the wires point "A",  "B"  and "C" with the stabilizer as on the picture (we do not forget, if it is necessary, about the capacities at the entrance and the output of stabilizer.) 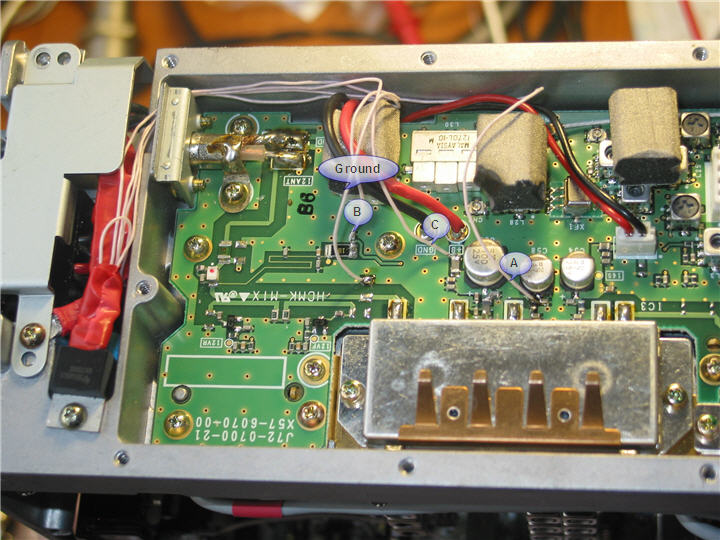 Everything, it is possible to turn all screws conversely.

After this mofication all stations noted that quality SSB of signal on 23cm became the same as on 2 m band.

Used automatic translation from Russian with few corrections by OK1VPZ.

Sorry, the original high resulution pics are not available any more (2022).